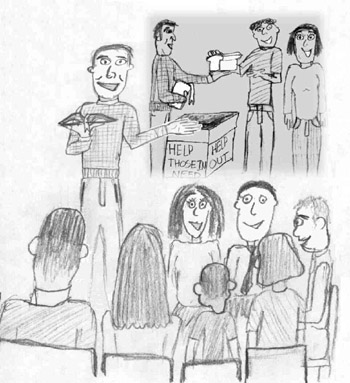 It was the Sabbath meeting of a home church in Vero Beach, Florida. Eight of us were seated in a circle on the hostess, Carolyn’s, screened porch amidst Florida pines and palmettos.

The meeting began, as it always does, at 1:00 in the afternoon. This is definitely a family-type gathering, including a potluck meal in late afternoon. The format varies. On this particular Sabbath, one person presented a study, with plenty of questions and discussion interspersed by the group. Another week it may be scripture reading with everyone participating. Occasionally an appropriate video follows the meeting.

The obvious qualities that characterize this group are warmth and openness. There are no “politically incorrect” issues here. There is complete freedom of thought and speech. And always the scriptures—not a set doctrine or belief—are the deciding measuring stick.

The group has remained stable since its beginning in 1997. As a visitor, I was impressed by the mutual respect within the group. At first, there appears to be no human leadership. In true New Testament fashion, no one “lords it over” anyone else. Not even subtly. But as one continues to observe, one can detect that the group does, in fact, have mature leadership that maintains such low profile that one has to be especially observant to detect any leadership at all. That leadership includes most or all of the core members. The group believes in and maintains order. But their aim is that order should come from the Spirit of the Father rather than human intervention.

Cliff, who leads a Bible study in this same home during the week, thinks that this openness, along with mutual respect and equality of members, is the reason for the group’s success. He says, “We were all captured by the organization at one time” and brought under the leadership of men. “When that happens, people do not have the opportunity to learn from the Spirit of the Father.” Conversely, this group aims to give individual members the freedom they need to develop that relationship with the Father.

Here are some tenets held by this fellowship:

1. When another person sees something differently from the way we see it, we must recognize that no one of us has all knowledge and the other person may be the one that is right.

2. People must be given the flexibility to grow on an individual basis. You have to believe the Father is going to come into your life through the Spirit and deal with you as an individual—not all at once, but over time. That is the only way that genuine growth takes place.

3. To present a viewpoint in such a way that puts down the belief of another is unacceptable. What happens is that, as humans, we tend to become proud and when that happens, we present what we believe in a way that takes others down.

Cliff further expressed it this way: “Messiah said you have to humble yourself as a servant. He was talking about the servant in a Jewish household who washed the feet of others. This was the lowest of servant positions. I think what the Messiah was saying is we have to look on ourselves as absolutely nothing. Otherwise, the pride that is in us will rise up and destroy everything!”

4. We encourage all members—men, women, and young people—to take part equally, and we give everyone equal respect. There is neither male nor female, nor slave or free in the body of Messiah. Women can be inspired as much as men and can be used by the Father just as effectively.

Since inception, the group has faced two problems in particular:

Problem 1: Some people left because the small group was not fulfilling to them. They were used to the feel-good experience of being with a large group where all believe the same. Cliff says he understands that because he used to enjoy that experience in the larger group himself but, “Problem was, we all didn’t believe the same; we just didn’t know it because we didn’t really know each other!” However, the perceived benefits of a large group are important for some people.

Solution: You have to just let them go with the knowledge that the Father said that once he has begun a work in someone he is going to work it out in their lives. You can’t hold people; but trust them to the Father, and don’t take it personally that they left.

Problem 2: People that bring a particular doctrine and are very dogmatic, almost saying, “If you don’t believe like this, then you can’t be right!” One man came into the group with great scriptural knowledge; but, along with that knowledge, he persistently claimed that the Messiah never came and that the entire New Testament must be discarded.

Solution: When all attempts to resolve the issue failed, the group decided that he must be asked not to attend. A selected member explained, “We are not condemning you at all; we just don’t believe this.”

Even in less serious matters, if a person consistently brings dogmatic doctrine or belief in such a way as to put other people down, we deal with that also, but humbly and in love. “You can’t allow someone, who continues to bring hostility and dissension, to destroy the group,” is the general viewpoint.

There is a growing number of churches meeting in living rooms—or if you live in Vero Beach—perhaps on Carolyn’s back porch! As Cliff says, “We need to be aware that we are all linked together and that something is going on in the body of Messiah”. He is calling us out into small, independent groups to search the scriptures and to seek a more direct relationship with Him. We don’t know how big it’s going to grow or where He is going to take us, but one thing we know for sure—it’s going to be an exciting trip!

Many of our readers will remember Tom Justus. In the 1960’s, he was head of all printing departments for the Worldwide Church of God. Leaving the WCG in 1978, he was a board member and active minister for many years in the Church of God International. Just a few weeks ago, Tom’s fellowship merged with an independent Church of God Seventh Day congregation. Having rented their building from them for several years, the merger seemed to be of mutual benefit. The two groups have agreed to cooperate on their common beliefs and to respect the other group’s beliefs that differ. Actually they agree on about everything except the 7th day group does not keep the Holy Days other than Passover.

The combined group totals about 60 members, of which 15 are teenagers. Their service format has one hour of interactive bible study, including participation by the ladies, and one hour of sermon and songs. The congregation is called the Church of God 7th Day/Sabbath Day and meets at 10:00 AM at 705 E Meadow, Springdale, AR 72764.

After leaving CGI in 1995, Tom and his fellowship group wanted to help with some form of evangelism. With a background in printing, and having built his business to be one of the larger printing establishments of its type in the state of Arkansas, Tom thought something that involved printing seemed appropriate.

He started to print some of the old WCG booklets (Yes, the same ones that brought so many of us into the Church). He started with seven booklets, gradually adding others until recently booklet number sixteen was completed, a condensed version of the old “Pagan Holidays or God’s Holy Days, Which?”. A card is included with each booklet offering more booklets.

Tom points out one big advantage to booklets is that they have such a long shelf life. For example, return cards are still received that list only the seven original booklets, which means a response from efforts of several years ago.

Tom says the whole thrust and interest is getting people doing something themselves. Therefore, the booklets are given free to those who will distribute them. There is a blank space on each booklet for the local group’s name and address. The same with the return cards, most of them are returned to the local group, not to Tom. The booklet program also includes ad “slicks” which is the term for camera-ready ads that can be placed in newspapers by just adding the local group’s information.

Results thus far seem very encouraging. Over 60 groups receive the free booklets, as well as numerous individuals. Some have put whole booklets on their web page ready for downloading; others offer to mail booklets to those responding to a web page. About 8,000 booklets have been mailed from just the latter method. Recently, the God Cares/ We Care Church of God in Little Rock, Arkansas started keeping the sabbath as a result of the booklets. It has about 100 members. Tom now has many of the booklets translated into Spanish. The Spanish editions have persuaded at least seven small groups in Mexico to start keeping the sabbath.

Perhaps the question asked most often is, “How about the copyright laws?”. Tom responds that all of the booklets were published before 1953, the copyrights on most of them have lapsed. Even if there are some that have not lapsed, the reason for most copy-right lawsuits is lost revenue. Since all versions of the booklets have always been given away free, lost revenue is not an issue. Plagiarism is not an issue because Tom does not represent these booklets to be his own work.

An unnamed group of 12 to 25 people meet at 1 pm each Sabbath in Goodlettsville, a suburb of Nashville, Tennessee. They are able to meet for free (they make a donation however) in a charismatic church owned by Johnny Cash’s brother in law. They do not play tapes. They have found that what works best for them is to have a strong song worship service, singing anywhere from six to twelve songs, then a short bible study—directed toward the children—then prayer requests and any special needs, followed by a round table bible discussion.

No one person is in charge and yet their fellowship has continued for over three years. Looking back on the experiences of their fellowship, Richard says it is probably better to not worry about numbers, if you have just one person to meet with and fellowship with on the Sabbath then that of itself is a good thing.

He also notes one of the first things their group decided was everyone has permission to disagree. For example, they do not all agree on the times for Passover, but they do not allow this to harm their fellowship. This goes along with the group’s other agreement, and this may be the most important one, and that is to have respect for each other.